Ayo Adesanya is one of the faces in Nollywood who crossed over from TV soaps to movies. Her 50th birthday came up on August 11. Not any inch looking her age, she spoke to Kemi Ashefon on what makes her tick

Background
I am Ayo Adesanya. I am an actress.

Journey into acting
I started acting right from primary school. Then, the Nigerian Television Authority used to bring their cameras to our school and we would act Shakespeare plays. I also took part in drama competitions. I attended St. Ann’s, Ibadan, where I also acted. I read Communication Arts at the University of Ibadan. In 1996, after my national youth service, I worked in a company at Agege, Lagos and was living in Lekki. After a year, I got to the office late and was suspended. I seized the opportunity and went to AIT for an audition. There, I met someone who said he was going for auditioning. From there, I was at Zeb Ejiro’s office, left and was at Opa Williams’ office, where I was auditioned for ‘Onome’. After a few takes in some films, I found myself in Tunji Bamishigbin’s soap, Palace.
No other passion 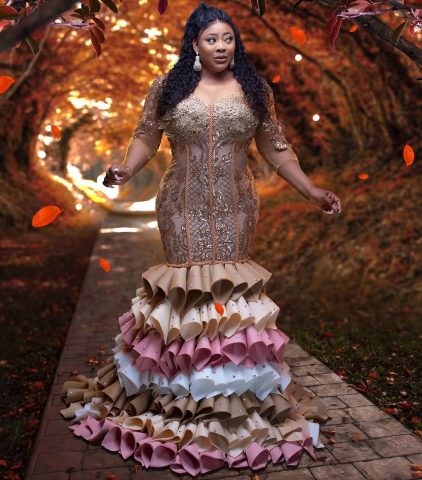 I love acting! I don’t see me doing something else. I can diversify but I will always continue to act because it is my world. There are some things you cannot be in real life but you can act it out. I have acted for 19 years and I can tell you that some people treat actors like gods! It has been fun and I give God the glory.

They are too numerous to mention. I have been on some locations where we were chased out when our time was up. With production, it could be crazy especially if the days have been pencilled down. There was a time my son was very ill and as the main actor, I was expected on set. The location was in Ogun State and I had to leave my son with my mother. I cried but the job had to be done. As a producer, there are days you experience hell with some members of the casts and other production challenges. I still enjoy everything.

Marriage
I was never married to Goriola Hassan. We lived together and had a child. He is 12 years old now. Reconciliation? I don’t want to talk on that. I have moved on and I guess he has moved on too.

Actresses and failed marriages
It is not only actresses, other professionals experience failed marriages too. I just feel you shouldn’t marry people in the same field because it has a lot of challenges. When you are together, you do the same thing and then the home suffers for it.
Fans
I think some fans just get it mixed up. Some see you on television and have a crush on you. They see you and they like something about you and they want it. Really, I don’t blame them and I have learnt to handle both the good and bad fans. No actor can do without fans, they make us and we appreciate them.

Regrets
None. I try not to go back on things in the past. That is what makes me unique. I do things my own way and I am in my world. I don’t call it regret, I have done things that I felt that I should have done the other way but at the end of the day, God makes me see that even if you had done it that way you could still come this way.

Inspiration
Everything inspires me— music, movies and nature. I watch Nigerian movies a lot and listen to lots of music. I learn from newspapers. Also, I get inspired by my fans too especially when I upload things on my Instagram page; what people say inspire me. As a Christian, the word of God also inspires me a lot.

Fashion
I am a bit on the big side and I wear what fits me. I know I have good legs and I show them off. I find my legs sexy and I wear things that show them off too. I only wear miniskirts and shorts when necessary.

Beauty routine?
I am lucky I have a good skin. I have used a couple of creams—some worked, some didn’t. My problem is my face because anytime I stay in the sun for too long, I break out! Unfortunately, I produce movies and could be in the sun working. Already, I am learning to deal with it.
Philosophy
You cannot match humility and if you are humble, you learn a lot. I also put God first in everything and it has worked for me. I believe in patience—learn to wait for your time. It’s not easy doing the same thing for so long but God is keeping the best for you.

Relationship
I am in one now and having the best of my life.

Another shot at marriage
Why not? I am still young and will definitely get married someday. But I am still learning because there are many things I need to know.

There are no upcoming events at this time.